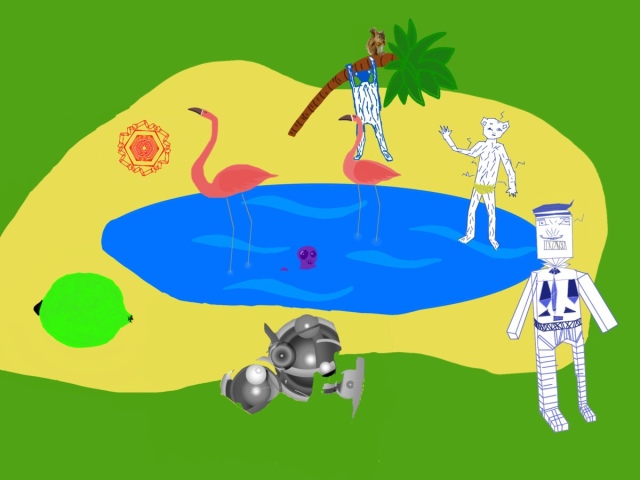 When I was ten years old, I came to own my first computer – an Amstrad CPC464, complete with integrated cassette loader and accompanied by a green-screen monitor. I divided my leisure time between playing with my Star Wars figures and Transformers while waiting the interminable period for games to load on the Amstrad, programming rudimentary little things in BASIC or playing out on the street. My embarrassing attempts at making music with computers were a whole hardware upgrade and around five years away.

And so it’s hard not to be impressed by mOnkee kingdom, a six-track EP of short electronic music vignettes by ten year old Clement Street as electronic mOnkee. On the evidence of tracks like the skittish, hyperactive ‘demented robot’ or ‘NERDY’, it suggests that Clement was brought up listening to the music of Mike Paradinas’s Planet Mu imprint instead of more predictable children’s fare like The Wiggles.

These are tracks filled with imaginative clashes between hardcore vacuum cleaner non-melodies, flashes of calypso-jazz piano and beats that have a go-anywhere randomness, giving each piece an unpredictable, edgy dimension. For me, the standouts are ‘sci-fi-ify that sound’ and ‘twilight octopus’ thanks to the addition of some neat sounds that evoke the memories of my beloved Amstrad’s cassette-noise squealing.

Any fundraising I did as ten year old was confined to sponsored whatevers at school – rounders, silences, spelling tests, etc – but then again we lacked both imagination and the ability to crowdfund in 1986. As if it wasn’t impressive enough that Clement made the EP, proceeds from its sale go toward an ethical store being set up in St. Neots, Cambridgeshire that will offer things like eco refills, coffee and in-house production of vegan chocolate. The crowdfunding page can be reached here.