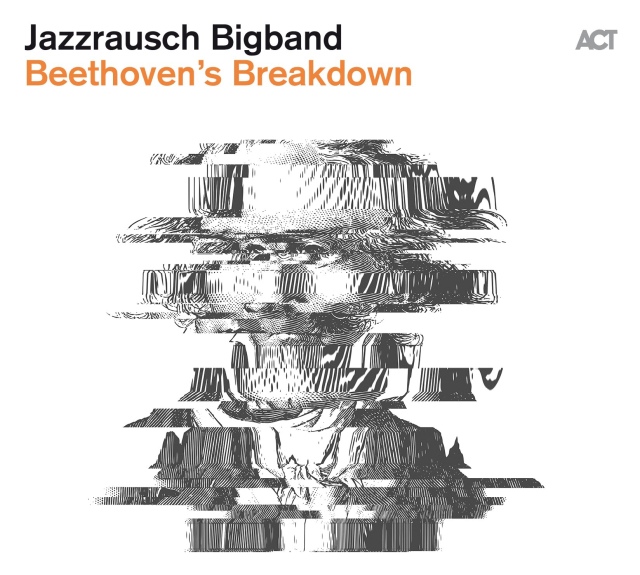 If that still seems unlikely, one cursory listen to the group’s arrangement of Beethoven’s ‘Moonlight’ sonata should help dispel any sort of notion that this is some sort of novelty hybrid. Here, the piece’s familiar melodic motif is interwoven with a thudding dance beat and freeform brass solos that swing gently on the framework of the composition, never detracting, but highlight this Munich-based sixteen-piece band’s dexterity within the jazz oeuvre. The major surprise are the small, subtly evolving circular sections running throughout the piece, creating a familiar sensation for anyone used to hearing the tweaked modulations of a minimal techno track, but here providing the connective tissue between that strain of dance music, Terry Riley and Ornette Coleman’s harmolodics. It perhaps shouldn’t work, but it does.

Beethoven’s Breakdown sees Kuhn and Sladek distinctively re-interpreting three Beethoven pieces – the aforementioned ‘Moonlight’ sonata, his Symphony No. 7 and the two-part String Quartet No. 14. Each one is delivered with the flair and sensitivity that Jazzrausch Bigband have become known for, in other words being respectful of the source material, the jazz tradition and the expected formalism of house while still allowing enough room for gentle improvisation. Leonhard Kuhn’s synths are deployed carefully, never detracting from the traditional jazz instrumentation but also providing interesting detail and colour throughout.

The album also includes a four-part sonata composed by Kuhn and featuring the trombone of Nils Landgren. This piece nods firmly in the direction of Beethoven but have more of an open, less densely-packed dimension that allows greater room for soloing – Landgren’s expressive trombone, the combined pianos of Severin Krieger and Kevin André Welch and Kuhn’s blipping electronics.