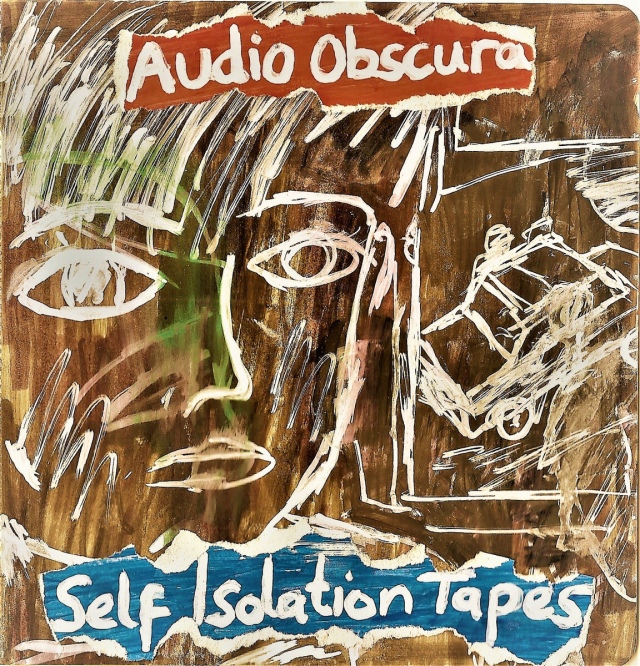 Early on in the COVID-19 outbreak, Etsy took down a t-shirt design emblazoned with the words ‘I Survived Coronavirus’ on the grounds that it was poor taste amid the progress of the disease. We are only four months into this – whatever this will eventually become – and despite government plans to try and progress toward a return to normality, when I think of that t-shirt I’m reminded chiefly of Captain Darling’s line at the end of Blackadder Goes Forth: ‘We lived through it! The Great War, 1914 – 1917!’

So it may also be that releasing music made at this point in isolation, when we could well just be at the start of something that, unlike Blackadder, runs and runs and runs (I’m thinking The Archers, perhaps), may also prove to be similarly premature. Fortunately, amid the slew of self-indulgent self-isolation releases are some genuine gems, and of these is Norfolk-based Neil Stringfellow’s Audio Obscura release, Self Isolation Tapes.

Electronic musicians, as a rule, have never had a problem with self-isolation of course. Theirs is a life of relative solitude, and so it is often hard to see what’s different between music made before isolation, during, and how it might sound when things return to whatever normal we’ll face after this. In Stringfellow’s case, a precedent for the sounds here could be found on his June 2019 Bibliotapes-released imaginary score for George Orwell’s 1984. I’m not prone to self-quoting, but this is how I concluded that piece: ‘Something about the way that Stringfellow has crafted these pieces seems to simultaneously remind us of the unflinching horror of daily life … while also presenting a sense of resignation and dismay that this is the world we currently occupy.’ I’m not saying that this is prescience on my part; more that Stringfellow’s music already seemed to be perfectly suited to dystopia, and so it goes that these seventeen pieces (plus three remixes) are perfectly suited to the current bleak outlook.

Talking of bleakness, not for nothing does Stringfellow include a track nodding in the direction of another savage work of fiction (or is it, now, biographical?) – Albert Camus’s The Plague, a depiction of a highly infectious disease wreaking devastation on an Algerian port. ‘Life In Oran’ is an unsettling listen amid unsettling pieces, beginning with the sounds of Stringfellow’s children playing innocently, which he then frames with murky pulses, dread-ridden haunted tones and a general sense of urgency and insistence. Stringfellow’s children appear again on ‘Each Day The Radio…’, calling for his attention against a backdrop of the daily news stories charting the progress of COVID-19 on the radio. (As an aside, I’m sure I’m not the only one who feels like the daily governmental proclamations feel a bit like something from 1984.)

Fortunately, Self Isolation Tapes isn’t a wholly bleak listen – it just mostly is. For example, buried deep in the track ‘Ghosts, Dusk, Decay’ is a solitary, tentative, almost hopeful synth note which appears fleetingly, only for the track to return to more discordant territory by the end; elsewhere, ‘Quiet World’, one of the shorter tracks here, is a piece floating forth on a delicate, soothing ambience. The pair of tracks ‘The 33rd Of April’ and ‘The 44th Of May’ may be titled with sardonic humour, but are presented with brooding textures and muted beats that become sonic approximations of industrial, noxious soundscapes or the fading broadcasts of horror soundtracks heard across post-apocalyptic wastelands.

‘One Day I’ll Grow Nostalgic For These Days’ is one of the most memorable pieces here, containing wistful piano and scratchy little sounds, a little like static coming from an old radio transmission. Here you find little melodic lines that seem to belong elsewhere, stuttering vocal segments and pretty bird song, a sparse rhythm outlining the weird sense of nostalgia embedded in the piece’s title.

It is a collection that is necessarily dark, even in the context of Stringfellow’s work. But perhaps it’s worth returning to ‘Life In Oran’ to put this all in context. Alongside the more negative moments are the interjections of real life – washing up, maybe, along with other quotidian tasks. Initially these throw you off and confuse you, but between those sounds and Stringfellow’s kids playing, they serve to remind you that life does indeed go on, even in the strangest of circumstances. Long after this is over, these sounds will be our reminder of how we felt while COVID-19 took its toll on us, with Self Isolation Tapes a diaristic time capsule into collective self-isolation.

Self Isolation Tapes by Audio Obscura was released Friday April 24 2020.