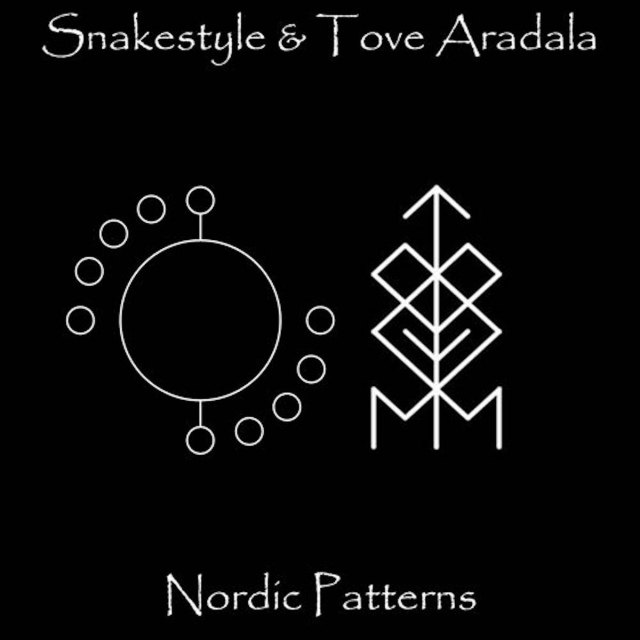 Somewhere along the lines, Nordic culture got a major overhaul, becoming shorthand for sleek minimalism and clinical modernism. Nordic Patterns, a collaboration between electronic musician Matthew Leigh Embleton’s Snakestyle alias and Tove Aradala seeks to redress that, delving deep into the essential fabric of Norse tradition with all its attendant mystique and rich, unique mythology.

Tove Aradala, or Tove Aradala Barbrosdotter Buhe-Stam to give her full name, is well-placed to comment on this. A High Priestess of the Temple Of The Eternal Goddess, a reconstituted religion which taps into the essential polytheism of Norse culture, a belief system which celebrated multiple spirits, gods and creatures. Using sections of Eddas (holy texts), songs and pieces written in the spirit of the region’s folkloric essence, Nordic Patterns affixes Aradala’s gentle singing and resonant chanting to an intricate, entrancing electronic backdrop crafted by Embleton. The album began with a series of field recordings on the Swedish island of Gotland in August 2019 before Embleton returned to London to complete the tracks.

Pieces like ‘Gnisvärd’ exemplify the approach. Here Aradala took traditional folk song rewrote it as the coda to a sparse backdrop of ebbing and flowing electronic sequences wrapped in hazy, frosty textures. Echoing sampled vocals wend their way through the piece, like voices lifted from an old Edison Cylinder, creating a subtle tension between the present and the past. Embleton reveals himself as a sensitive collaborator to Aradala, bathing her ethereal, yet commanding, voice in shimmering reverb and framing her vocal with structures built with a naturalistic fragility. On ‘Klangstenen’, that backdrop is fashioned from liquified, jazzy tones and beats reduced to a primal essence of clicks and pulses; on ‘Trullhalsar’ it is a landscape of dubby bass and wavering, tentative melodies.