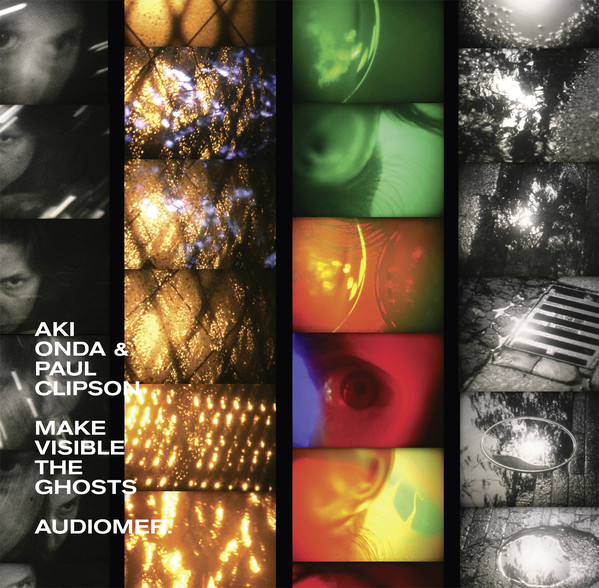 “It’s not about the sound and image resolving. It’s about the ambiguity between them and suddenly this feeling of coalescence, then also disparity and dissonance.” – Paul Clipson (1965 – 2018)

For the best part of nine years until his untimely death at the start of 2018, filmmaker Paul Clipson and experimental audio artist Aki Onda were friends and like-minded collaborators, both sharing similar and complementary sensibilities and interests despite working in arguably distinct disciplines.

Make Visible The Ghosts was originally conceived for a date at Brooklyn’s ISSUE Project Room. The premise that the pair came up with was a collaboration without collaboration: each would prepare a seventy-minute piece in isolation without revealing to the other what they were doing, which the pair would then perform simultaneously in February 2013.

In Onda’s case, his intended accompaniment to Clipson’s film left ample room for improvisatory, in-the-moment responses. He talks about hearing the whirring motion of the reels as something that needed to be brought into the sound-field he had crafted, quickly amplifying the sound during the performance with a microphone and giving that prominence in his audio collage; similarly, the progress and switches of Clipson’s images inspired him to add intra-channel radio static – that unpredictable, ghostly, between-frequency, unplaceable sound somewhere between the capture of spirit voices and out-of-control analogue synth spurts – across the length of his piece.

The version of Make Visible The Ghosts released by audioMER consists of four ten-minute tracks developed out of the material delivered at ISSUE and subsequently reworked over a period of three years, with stills from Clipson’s visuals presented as a regimented collage to form the LP sleeve. Perhaps out of reverence, or perhaps because it felt like it had become an integral part of the piece, Onda’s amplified reel recordings provide an occasional rhythm of sorts, and the freeform radio manipulations run throughout the four tracks like an improvised solo by a bandleader. Beneath those two chance-derived elements you hear the staples of Onda’s approach to field-recorded sound: traffic, conversation, atmospheres, all glued together by electronic tones, drones and processing that, while meticulously prepared, nevertheless feel spontaneous and brimming with energy. Though often contemplative, there are also moments of tension, such as the growling electronic interjections that dominate large sections of ‘Palm Held Out For Us To Read’.

Make Visible The Ghosts could not have existed, in this form, without Clipson. His death has left an indelible mark on Onda, and this album represents both a tribute to a friend and mentor, while also acting as a necessarily unique celebration of what is possible in the field of multi-disciplinary collaboration.

Make Visible The Ghosts by Aki Onda and Paul Clipson is released September 20 2019 by audioMER.