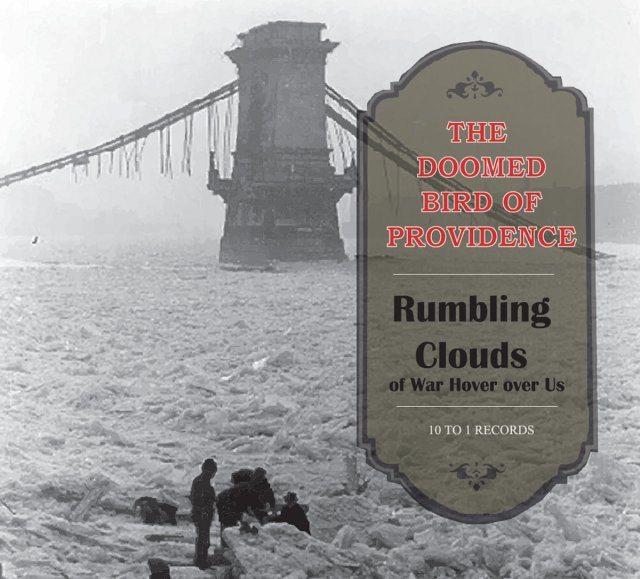 I fondly remember a time when war was the only existential threat I used to worry about. When I first saw the title of the new Doomed Bird Of Providence EP, I initially thought that it was a slightly dated depiction of the parlous state of things around us; a pre-COVID view of the world, if you will, of knife-edge crises concerning dictatorships, WMDs, terrorism and displomatic emergencies caused by seized oil tankers.

This isn’t the subject matter of this four-track EP, however, and anyone with a passing knowledge of Australian-born, London-based Mark Kluzek’s band would appreciate that their evocative instrumental music is principally concerned with the past.

Where the band’s earlier releases directed their unflinching lenses at Australia’s colonial legacy, this release is focussed on Kluzek’s grandfather and his journey from his invaded homeland of Poland in the Second World War, through Europe, to Scotland and thence to Australia. Using hand-me-down recollections from relatives and a book detailing his grandfather’s military troop’s journey during the war, Kluzek’s piano compositions were designed to evoke each pivotal stage of an escape that he owes his existence to.

With Kluzek’s mesmerising playing dominating the foreground, accompanied by fiddle and militaristic drumming, the EP’s title track begins with a languid, almost wistful air, somewhere between resignation at the oncoming invasion and a regretful look back at the home that was soon to be abandoned. As the tracks progress, a firmness, a determination and yet also a tension beings to set in, with the final track – ‘But Something To Aim For’ exhibiting a hopeful, yet desperate sense of urgency amid a wall of rising, cacophonous layered instrumentation. These pieces are framed by a folk music palette, itself a nod in the direction of Eastern European traditions, lacing their tonalities with echoes of the past and a profound sense of loss.

The Doomed Bird Of Providence have always excelled at producing such historically-informed narratives, whether about tuberculosis diaries or natural disasters, loading each of their pieces with a semi-imagined first-person perspective that is all the more remarkable considering they operate squarely in the field of instrumental music. Rumbling Clouds Of War Hover Over Us cements that yet again, yielding four breathtaking soundtracks to a deeply personal subject matter that convey so much – without saying a single word.

Rumbling Clouds Of War Hover Over Us by Doomed Bird Of Providence is released April 17 2020 by 10 To 1 Records.