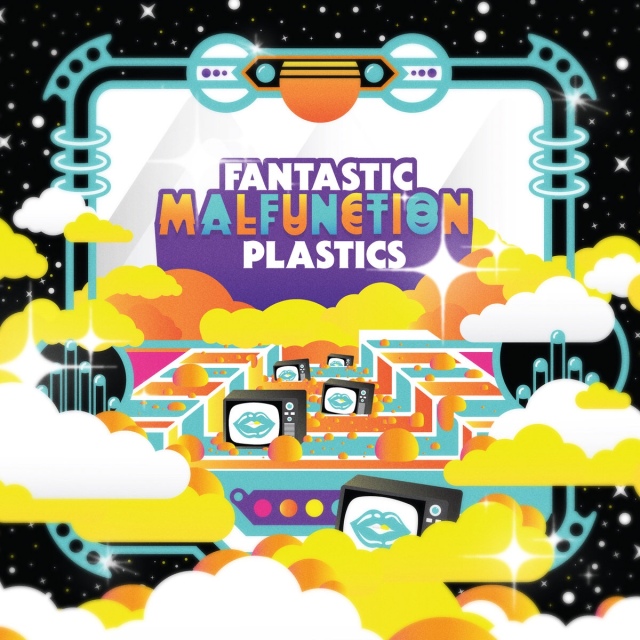 Recorded over a period of two years at their brilliantly-monikered CoCo Beat Studios in Brooklyn, Malfunction is the follow-up to The Fantastic Plastics’ 2015 debut album, Devolver. As with that first record, the order of events here is hyperactive tracks threaded with spiky guitar riffs, buzzing synths and chunky drums that offer up a futuristic vision of pop drawing a line back to the most effervescent and innovative moments of electrically-infused post-punk.

From the energetic forward motion and symbolism of ‘Numan’ (with its general nod in the direction of the erstwhile Gary Webb and possibly Wayne Knight’s annoying character in Seinfeld) to the insistent high-speed glam-punk of opening track ‘Disintegration’, Malfunction is (mostly) an upbeat record. The harmonic interplay between the band’s Tyson Plastic and Miranda Plastic has a gleeful charm, even if their outwardly euphoric tracks appear to mask a general cynicism at the state of the world today. The effect, on the sinewy, Cars-y ‘Telephone’ or the feisty political grandstanding of ‘Disconnect’ – a thinly-veiled bash at a certain high profile abusing the freedom of social media – is slightly disorienting: here you are, pogo-ing around like a complete lunatic, and then when you start to focus in on the lyrics, you realise you’re actually hearing a cheerful protest song.

The frantic pace drops just twice, once on the charming space-age instrumental vintage synth interlude ‘Neon Satellite’ and again – briefly – with the jangly guitar intro to the otherwise perky ‘Bad Day’. The latter has a brilliant, cutesy quality that wouldn’t go amiss on a kids’ TV show, even if its theme – about either being chronically hungover or clinically depressed – sit slightly uncomfortably with the joyous ‘la-la-la’ing and generally upbeat mood of Miranda’s delivery.

The standout track here, ‘Evacuate’, finds Tyson doing a brilliant impersonation of Phil Oakey’s leaden delivery, its lyrics and insistent guitar riffery urging us to get the hell out of dodge before the world ends. That it ends suddenly with a brief, dissonant electronic tone suggests we didn’t quite make it, but if this album was the last thing you heard before the world ended, frankly it doesn’t seem like the worst way to go.

Malfunction by The Fantastic Plastics was released October 4.

2 thoughts on “The Fantastic Plastics – Malfunction”