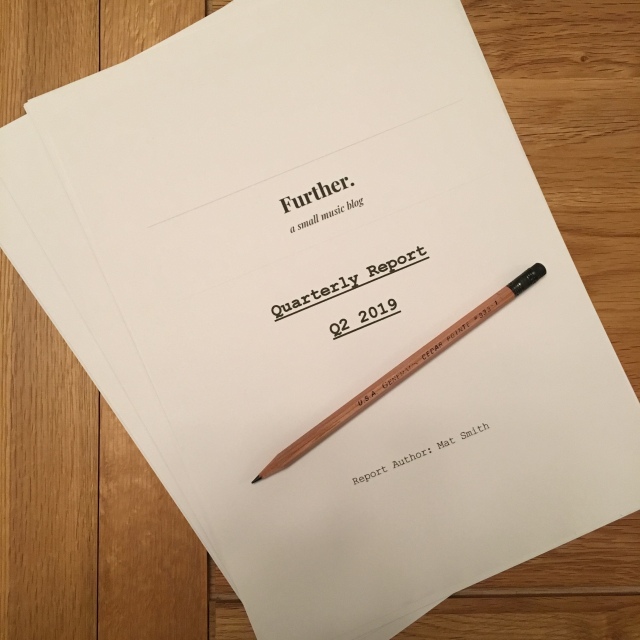 At the end of March, reviewing Further.’s first three months of operation, I made the commitment to try harder during the second quarter to significantly increase the delivery of content to the site. I’m pleased to report to readers that this commitment was fully delivered during the period under review, with a total of 23 albums reviewed.

During the second quarter I also consciously increased the site’s diversification and eclecticism, covering graphic score improvisations, just intonation microtonal works, modern classical, glitchy electronica, ambient soundscapes, electronic psychedelia and electronic pop with an even-handed and balanced review policy. I covered releases by some of the most niche cassette labels to the largest independents. I also welcomed two new guest writers to the Further. team in the form of Reed Hays (from Reed & Caroline) and Bryan Michael (from Alka).

I added a new micro-feature to the site in the form of 3 Questions, intended to provide a small window into what an artist values and what motivates them. This was added in an effort to provide bite-sized interviews that were both easily digestible and yet which provided significant depth of insight despite only consisting of the three open questions posed to each artist, sitting alongside traditional feature writing and longer In Conversation Q&A interviews.

I’m pleased that I was able to feature more female electronic artists during the second quarter, and this will continue to be a growing focus in successive quarters.

I look forward to reviewing Further.’s ongoing progress in three month’s time. Thank you for supporting my small music blog.

New York is a fickle mistress: all are welcome (subject to having the right immigration papers), its charms are universal, but few are invited to stay forever. Each and every time I visit, I hope that at some point the city will just absorb me, cling onto me, plead with me to hang around for as long as I want, rather than sending me back to JFK feeling as rejected and unwanted as a cast-off, spurned lover; like I have no place there; like I just don’t have what it takes to make it there.

It was in that state of mind that I arrived back into London from New York on early Friday morning, and it was in that state of mind that I listened to I Am Easy To Find by The National. This was possibly a mistake. Notwithstanding the mood of this album which, like much of The National’s music, has a brooding, maudlin quality – if that’s what you’re drawn to, which I generally am, it seems – there’s one lyric on the fragile, electronics-laden title track that seemed to be intended just for me: “You were never much of a New Yorker / It wasn’t in your eyes.” To me, it reaffirmed how I felt right then: you just didn’t fit in; you’ll never completely fit in; feel free to come back, but don’t expect us to let you stay.

Even though that track arrives almost a third of the way into the album, it was that quality of emotional turbulence and displacement that I heard throughout I Am Easy To Find. I’m sure that tracks like ‘Hey Rosey’ (with guest vocals from Bowie collaborator Gail Ann Dorsey) or the stuttering, complicated trademark Bryan Devendorf rhythms of opening track ‘You Had Your Soul With You’ and ‘Where Is Her Head’, or even Kate Stables’ plaintive ruminations of the title track do have some sort of transcendent, euphoric quality to them – if that’s what you’re seeking – but for me I just wanted the darkness, and that’s what I found in this album. I wanted to feel shit about my lot and the non-linear rock gestures – processed and infused with copious synths and electronic rhythms with the assistance of Mouse On Mars’ Jan St. Werner – all sitting restlessly beneath Matt Berninger’s quietly expressive vocals, enabled that. Maybe one day I’ll acknowledge the sparse and tender balladry of ‘Kansas’ or the shimmering synth textures of the duet with Lisa Hannigan on ‘So Far So Fast’, or maybe I’ll forever associate this record with feeling jetlagged and empty.

If the album spoke to me in a way that suited my mood at that particular point, the accompanying twenty-five minute black and white film, directed by Mike Mills, left me with profuse tears running down my cheeks; tears that were years and years in the making.

The film charts a life, from birth to death; through joy and sadness; from innocence gained to innocence lost; the discovery and development of oneself; the anguish of relationships; the first meetings and last goodbyes; the endless, endless, endless arguments; the wanting of different things; the inexorable passage of time; the purposefulness and futility of existence. The central character, played vividly and sensitively by Alicia Vikander, never ages throughout the film, even though all those around her do, while the captions – acting as the film’s dialogue – are largely culled from tracks on the album, with the words of ‘Dust Swirls In Strange Light’ and ‘Hairpin Turns’ suddenly making infinitely more sense once coupled to the visuals.

It takes a few short scenes to figure out what Mills’ story is showing us, but the gravity of what is unfolding becomes apparent when Vikander races abruptly into teenagehood, with the attendant and all-too-common hatred of her mother, despite everything she provided her daughter. There’s something about the duration of the film, and the way songs from the album – with all their evocative traits of unresolvedness – soundtrack Vikander’s passage through her life that takes its toll on you; if Mills had compressed her life into the length of a single three-minute song, you’d have no opportunity to adjust to what is inevitably going to happen to everyone she has ever loved or cared about, and then her own passing. Instead, by stretching this out over an intermediate length of time – too long for a promo video, too short for a feature film – the progress feels unswervingly, unbearably, savagely languid.

The film of I Am Easy To Find is thus harrowing viewing in the way extreme horror films are, and yet everything the camera shows you is utterly quotidian, unexceptional, unremarkable – reflections of your own life, maybe. As with the tone I was drawn to on the album, perhaps it was the mood I was in and my own vantage point from probably halfway along my life’s own twenty-five minute high- and lowlights reel – that point where you start to acknowledge your parents’ mortality, where your kids don’t idolise you anymore, where nothing that was previously carefree and innocent seems to be straightforward any longer – this beautiful film made difficult viewing for me. There is plenty of unbridled joy here, I’m sure, but I was mostly oblivious to any of that.

That’s all I have to say. Maybe the entire I Am Easy To Find package will affect you this way and leave an indelible mark on you like it already has for me; maybe it won’t. Maybe you’ll see the happiness in all of this that I can’t see. Maybe your eyes will suggest you belong in New York after all. Maybe you’ll brush off your teenage daughter’s disdain for you or the feeling that you’re exactly where you were yesterday, last year, a decade ago – just older. Take a listen (or a watch) and decide for yourself. I’ll still be right here. I am easy to find. I’m not going anywhere.

I Am Easy To Find by The National is out now on 4AD.